The main event looming on the near-term horizon that may accelerate any slow down phase is if the central bank adjusts monetary policy sooner rather than later. The Reserve Bank of Australia (RBA) has maintained the official cash rate at a record low 0.1 per cent since November 2020, in addition to its quantitative easing program that has injected more than $400 billion into the economy through the recession.

It’s clear the RBA is firmly focused on inflation outcomes along with labour market conditions and wages growth, to guide their policy decisions. Financial markets and economists believe inflation pressures will force the RBA to start normalising rates by August, ahead of spring selling season. Higher interest rates will slow economic growth, the jobs market, and housing to keep inflation under control.

While inflation “has picked up more quickly than the RBA expected”, the central bank is not ready to conclude that inflation will remain sustainably within their 2-3 per cent target range. Uncertainty related to the war in Ukraine, rising energy costs and global supply chain disruptions are adding further complexity to the policy environment.

While the unemployment rate is trending towards the sub four per cent range, a more significant lift in wages remains the missing piece of the puzzle before the cash rate shifts higher. The RBA notes wages growth has picked up (the wage price index was up 2.3 per cent last year) and expects wages to rise further under tight labour market conditions, but the RBA anticipates growth in wages will be only gradual.

Despite the growing downside risks to the housing sector, other factors should help to offset a significant downturn. As the economy strengthens and labour markets tighten, the risks around mortgage stress or default should lessen. Open international borders will help to support demand, initially from a rental perspective, but longer term for home purchasing as well.

The number of properties for sale will also increase over 2022 which creates more choice for buyers. What we do know is that market fundamentals right now are still helping our clients who are looking to sell. Our data tells us that our sellers who choose to sell via the auction method are rewarded with a 12 per cent higher price under the hammer than if they’d accepted a prior offer. 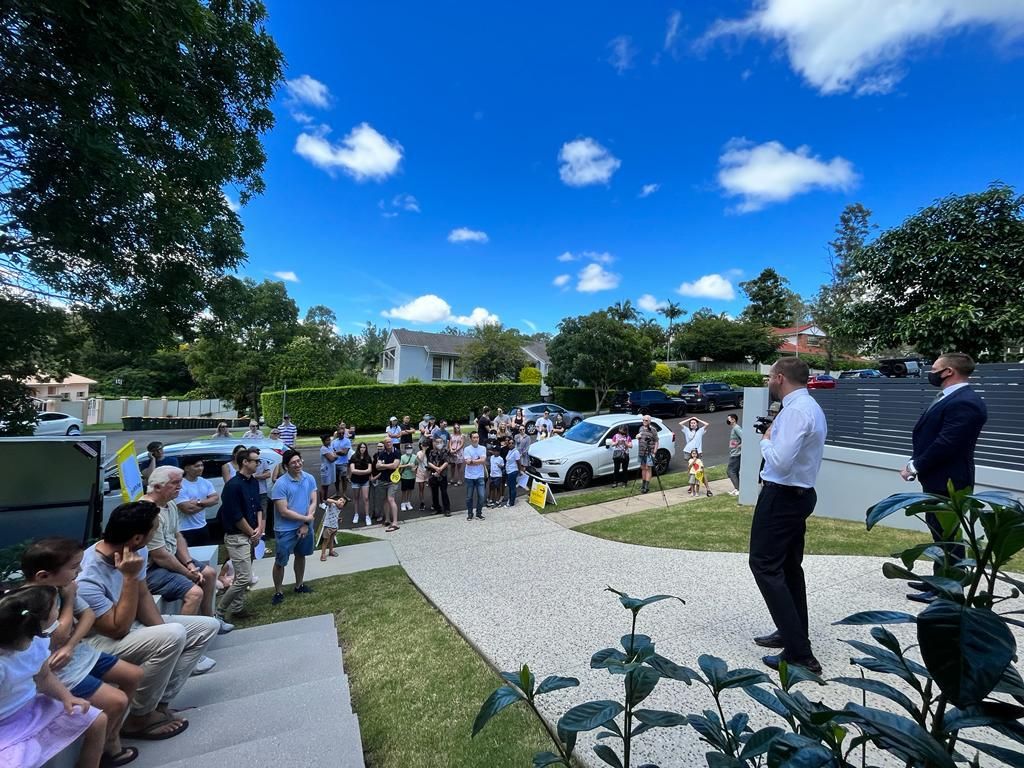 As the pandemic becomes endemic, what are the main influences on Australian property now?

Is the pandemic over? Likely not by a long shot but there has certainly been a change in how our economy operates over the past month – fewer masks, retreating threats of lockdowns and less front page news on COVID-19 cases. While COVID-19 is no longer the main influence on the market, the outlook is in some ways becoming more complicated. There continues to be a lot of uncertainty around finance, particularly the outlook for interest rates and restrictions to finance. Positively, international borders are now open however there are problems – recent floods and skyrocketing construction costs being the main ones. And to make things even more complicated, we will have a federal election this year, the date is yet to be determined and we’re yet to hear any major policy changes. This year, we’re in a very different stage of the cycle. Prices are slowing already in our biggest cities, while rents continue to rise. Smaller cities are now benefiting from affordability and strong economic growth. In 2022 price growth will continue but we’re looking at a very different market to the turbocharged conditions of last year.

This month interest rates remained on hold and the RBA announced that they were prepared to be patient in their handling of monetary policy. This comes at a time when inflation looks like it will continue to rise and there continues to be significant global uncertainty.

Construction cost hikes are having big impacts on the building industry. Meanwhile oil prices keep rising and have been made worse by the Ukraine/Russia conflict. Crude oil has hit $US100 per barrel and is expected to continue to rise. While this has led to significant petrol price rises for Australian consumers, our lower reliance on Russian gas and less Government stimulus has meant that our inflation rates remain lower than many other parts of the world – e.g., US at 7.5 per cent and UK at 5.5 per cent.

Fundamentally, an Australian interest rate rise will do little to prevent oil prices rising and will have a limited impact on construction costs. It will, however, slow the economy which would hopefully go some way to slow price growth. Home loan lending dropped in October but since then has come roaring back to hit a record high in January of $33.7 billion. While investor lending continues to increase, the big surprise has been the return of the particularly high levels of owner-occupier lending. This level dropped significantly following the end of HomeBuilder and a withdrawal of first home buyers. First home buyer activity has dropped over 30 per cent however there are now more upgraders taking out bigger loans. 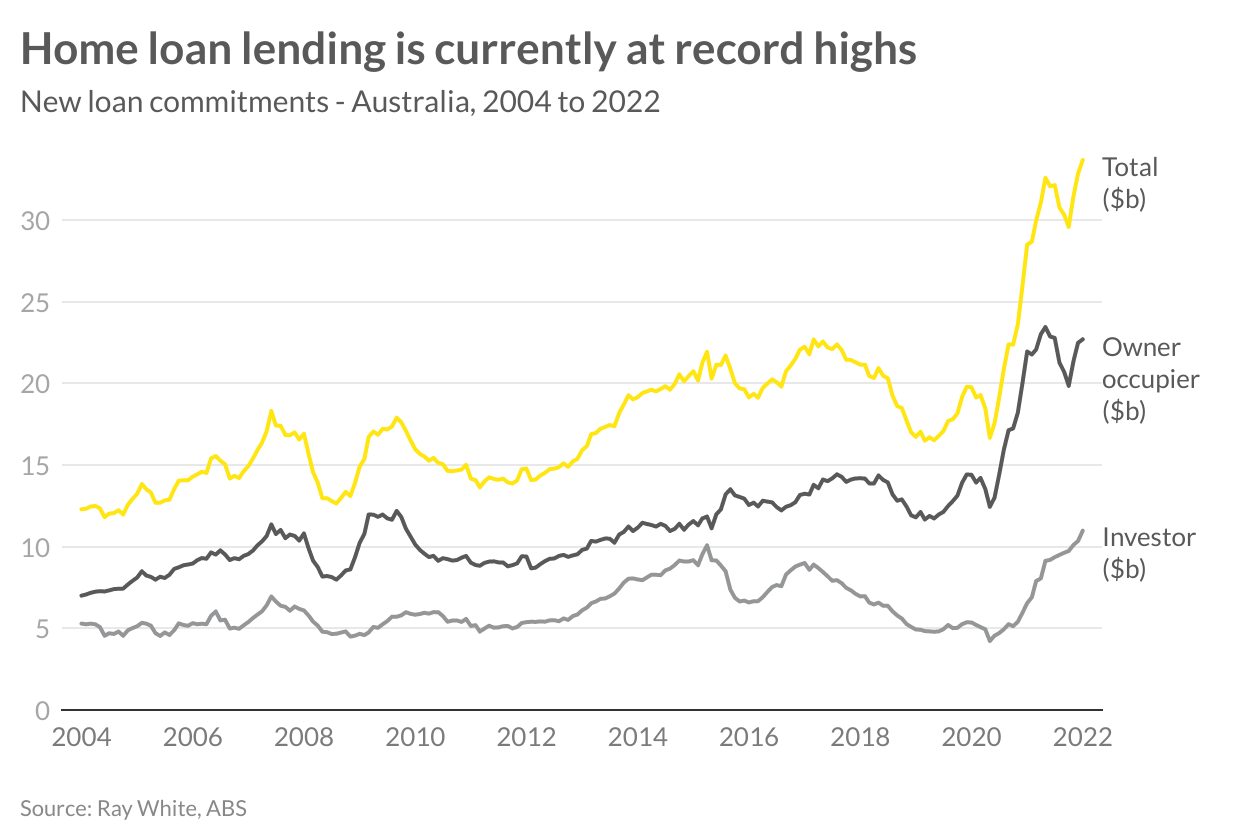 The first set of restrictions were put in place in November 2021, however were relatively mild and appeared to have had a minimal impact on home loan lending. At this point, we’re yet to hear of any more potential changes but given the continued rise in home loan lending, it’s possible we will in the coming months.

While the opening borders are great news for anyone wanting to travel overseas again, it’s also particularly positive to our economy.

Australia’s strict quarantine restrictions kept us safe during the worst of the pandemic but it wasn’t great for our economy. Our education sector has suffered from a lack of international students. In apartment markets close to universities, we saw high vacancy rates and worst of all, we’re continuing to see employee shortages across a wide range of industries.

Open borders will initially mean rental increases. People migrating to Australia, or coming here to study, will typically rent – at least initially. While this is good news for tenant starved markets like Melbourne CBD and Parramatta, it’s less positive for places like south east Queensland which was already seeing rental shortages prior to the floods.

Following rental rises, it’s likely that foreign investors will also return. This will partly be driven by better rental increases but also because of the ability to travel to Australia. Rental rises and foreign buyers returning will be two things that kick-start the next construction cycle, particularly for apartments.

We still don’t have an election date and we still don’t know exactly what policies will be proposed by either party with regards to housing. It’s likely that given how much house prices and rents have increased over the past 12 months, as well as the withdrawal of first home buyers, that affordability will be the hot topic.

Trying to solve affordability is complicated. Increasing supply of housing is the gold standard when it comes to creating enough homes for the people that want to live in them however building homes where people want them is not easy. Construction costs, land availability and existing resident pushback are some of the challenges faced when trying to build more homes in desirable suburbs.

At this stage, it seems unlikely that investors will be a target in the same way they were in the last federal election. Right now, we have a rental crisis in many parts of Australia, something that will only get worse once population growth starts up again. Restricting rental housing at this time doesn’t make sense – although it would help many first buyers get into the market, it would lead to even greater rises in rents which impacts young people and those on lower incomes more heavily.

This month, flooding impacted large parts of the eastern coast of Australia, spreading down from Brisbane to Sydney. Looking back at previous natural disasters, we can see a fairly consistent timeline as to what happens to the market. Initially, rents start to rise as there is a shortage of homes available for people that need to repair or rebuild their homes.

In the 12 months following the natural disaster there are usually far fewer sales taking place, particularly if owners in the area are well insured and there’s significant government support to rebuild the area. By the three year mark, homes have been rebuilt and ideally there will have been significant government spending to minimise the chance of a similar event occurring. Home values typically increase as better and safer homes are built in place of older homes.

Within five years, provided the natural disaster hasn’t re-occurred, house price growth is typically following the local market or is being driven by other factors such as population growth.

Rising construction costs were a major contributor to inflation in 2021. And at this point, it doesn’t look like this growth will slow anytime soon. There are a lot of problems that will take some time to solve including:

We’re already seeing the fallout from this. ProBuild has gone into administration and a number of smaller home builders are having trouble with fixed price contracts that were put in place last year. We’re going to need more housing once borders reopen, however it will take some time for new projects to be completed as a result of this, prices and rents will be further pushed up.

Join us for an exclusive design morning with Coco Republic