There’s a lot going on in the lending space at the moment, but let me assure you of one thing. No one knows what’s going to happen and anyone who says they know is delusional. Remember, it was only three months ago that experts said the RBA were not going to raise rates till 2024. Pfft. Here are the three big questions I’m getting at the moment and my answers: some brutal, some hopeful and all based in the reality of doing a substantial number of loans each year on the Lower North Shore.

1. Should I fix my loan before rates rise?

Lots of my clients are asking whether or not they should fix their home loan. But, if you haven’t yet fixed your rate, I have some bad news: you’ve missed the boat.  Even if you think there’s an option out there, some simple back-of-envelope mathematics shows that the ship has sailed.

Let me walk you through it. At the end of last year, fixed rates were low. For argument’s sake, let’s say they were at ~2 percent while the variable rates were ~2.3 percent. Now, the majority of banks have increased the fixed rates and they’re over 2.5% and, in a lot of cases, at 3%. You’re not better off with a fixed rate in this environment.

But all is not lost. The glimmer of hope for refinancers are with the likes of ING and Macquarie Bank who have reduced their variable rates down to circa 2 percent. I’ve got an ING variable loan right now at 1.99 percent.  It has got to go up at least 0.5 percent to be in line with where a fixed rate is. And that may happen in August… or later in the year… or maybe even next year depending on the monthly and quarterly economic figures the RBA board receives. And then there’s the added complication of an election in May. So, some would posit that the chances of there being any rate rises before May are pretty slim.

So, the reality is that you wouldn’t fix your loan right now knowing that you’re paying 0.5 percent or more, 0.7 percent or 0.8 percent more than the variable rate, when the rate rise may only be 0.25 percent. On a million dollar loan, you’re talking about paying nearly $10,000 a year extra… for what?

But here’s the other thing no one really knows. Lenders don’t follow the cash rate anyway. Consider the ING loan I mentioned earlier. ING reduced their variable rates the other day without any cash rate movement. They’re at 1.99 percent variable, and Macquarie Bank is at around 2.04 per cent. Pretty appealing numbers. But, if these lenders want, they can raise those very appealing rates at any time. The borrower doesn’t have control.

2. What if I want the predictability of a fixed rate?

So fixing at a higher rate does work for some; namely those who seek control. If you’re conservative, you can lock your rate in even though it’s less appealing to do it now than it was at the end of last year. Locking in, in my opinion, suits two types of people.

1) A pure investor that needs to protect their rate of return, so that they can forecast. If you’ve got a property with a yield of 3.5 percent, and you want to know that your outgoings at 3 percent, well, then it makes sense to lock it in.

2) A borrower who doesn’t have the ability to make lump sum reductions or utilise an offset account. Commonly, people who are on a set wage with no likelihood of a bonus or increase. Someone who needs to know their exact outgoings.

Borrowing levels have peeled back. At the end of last year, some of the banks would let you borrow seven, eight or even nine times your income. Now, we’re experiencing borrowing limits closer to six times your income, at a stretch.

Despite what some are saying, I don’t think it is harder to get a loan in this market, if you’re the right clientele. The assessment rates haven’t changed. Lenders will find a way to give you the money, just as long as you’re not trying to push the boundaries that you could push last year.

What is changing is valuations. I’ve seen a few instances where valuations are coming in low; someone will buy a property at $5 million, and the valuation is coming in at $4.8 million, for instance. If you are borrowing the maximum in terms of loan to value ratio 80 or 90 percent of the value of the property, then that’s a problem.

But again, most of my clients around the Lower North Shore – particularly if they’re upgrading – are borrowing 60 or 70 percent of the value of the property. And this market is a buying paradise for anyone who’s borrowing sub 70 percent LVR: you’re getting cheap rates, and the banks are going to do what they can to try and help you out.

Talk to Matt if you would like any lending advice. 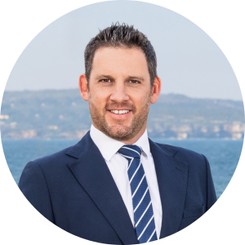 Investors are back – and local intel has never been so crucial