Wollstonecraft resident Ian Heads is a highly respected journalist, historian, author and storyteller who has covered the passing parade of Australian sport for 50 years. Since 1988 he has been the author or co-author of more than 40 books. In a succession of major titles Ian has told or helped tell the stories of some of Australia’s greatest sporting figures, including Mark Taylor, Louise Sauvage, Ian Thorpe, Frank Hyde, Don Talbot, Mike Whitney, Noel Kelly, Arthur Beetson, Nova Peris, Des Renford, George Piggins, Ken Sutcliffe, Wayne Pearce, and renowned paramedic Paul Featherstone, aka ‘The Hero of Thredbo’. He shares his local favourites with us and why he loves living in the area.

How long have you lived here and why did you choose Wollstonecraft?
My wife Joy and I have lived here since 2009, making the move across the Bridge after years of living in the Eastern Suburbs where I had grown up in post War years, in a rented cottage in Rose Bay shared with my mother, grandmother and sister. The big move of more modern times came about when Joy and I sold our house in Bronte and began what became a Sydney wide search. Over a number of years, we had often driven to Waverton for lunch. Already the surrounds – the attraction of Berry Island with its view through the trees across to the city, shone brightly, on reflection I know that I had been drawn to the area long before – for a time, relatives lived in the Wollstonecraft area and I would visit from time to time. Maybe that is when the flame was lit.

Best thing about Wollstonecraft?
Even then as an early teenager I was taken with the attractions: the birdlife and beautiful bushland that was so reachable now close to where I now live, remains a probably little known gem of Sydney life …with the harbour just a stroll down the hill.

Worst thing?
The train noise. For years residents have asked for a sound reducing wall to be installed on the bend of the line from Wollstonecraft to the north but are ignored. It is sometimes impossible to enjoy the outdoors let alone have a conversation in peak hour. 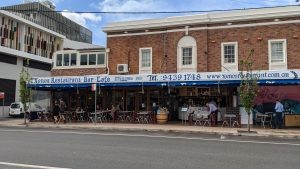 Best coffee in the area?
Xenos.

Where do you like to have a drink?
Usually at home on our beautiful outdoor veranda (between the train noises!)

Any local hidden gems you’d be kind enough to share with us?
Smoothey Park. (pictured) 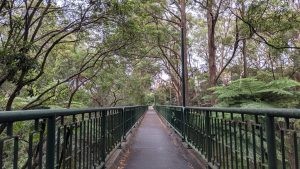 What’s your favourite room at home and why?
My office, which opens on to our downstairs side garden.

What’s your perfect weekend?
A good walk with our greyhound Charlie, listening to jazz and a good book.

If you had to live anywhere else in Sydney or the World, where would it be?
Somewhere in the Australian bush, the English countryside (in Summer) or the south of France.

And we must ask, who has been your favourite sporting icon to work with?
“Big” Artie Beetson even though he ate us out of our chocolate biscuits when we were working on his book.

Find out here where you can get a copy of Ian Heads and Norman Tasker’s book, Great Australian Sporting Stories, published by Pan MacMillan