The Market in Financial Year 2021

Market 2.0 – a look back at this unforgettable financial year for property in our patch

Part of the prestige of the Lower North Shore has long been its high-end real estate offerings. This year, we’ve seen the pandemic unmistakably amplify the appeal of our property sector.

In this report, I look at the many factors that have shaped the property market of FY21. Not least of which is the reality that we’re all spending more time at home, and subsequently the bricks and mortar we surround ourselves with have taken heightened relevance to our quality of life.

The way we live, the way we work and the way we socialise has fundamentally changed. Emphasis has shifted to the home. Buyers – and indeed people who did not think they would be selling or buying again for some time – began looking at homes in different ways and re-evaluating what was important.

Despite financial volatility worldwide, our property market bounded. It was certainly helped by the Reserve Bank response in dropping the official cash rate to historic lows of 0.1 per cent. As you know, banks followed suit. Lending became cheap, credit became easily accessible and buyers flocked to the market.

Australia-wide, property prices increased. In fact, the nation recorded the largest value rise on record. Australia’s 10.6 million residential dwellings are now worth more than $8.2 trillion, after rising by a stupendous $449.9 billion in the March quarter to breach the $8-trillion mark for the first time.

Here in the Lower North Shore, price growth was conspicuous. Take just one of our auctions, a quintessential five-bedroom Mosman family home. In spring the vendors were contemplating going to auction with the estimated value on the property sitting between $4.2 million and $4.4 million. Fast forward to February when they did commit to selling, as market conditions soared, the property sold for $5.5 million – more than 25 per cent above market expectations. 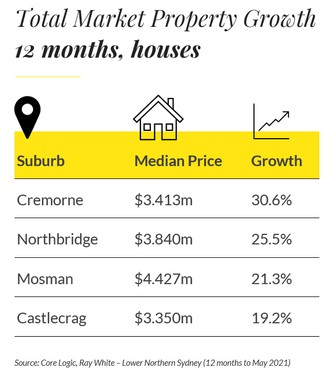 More broadly, in the last 12 months we saw an astounding 150 per cent increase in the number of properties for sale over $10m. The Mosman area alone grew in price by 21.3 per cent with median house prices now sitting at $4,427,000

This exponential growth echoed across the Lower North Shore as Cremorne saw a 30.6 per cent growth in median house prices, followed closely by Northbridge at 25.5 per cent and Naremburn at 23.6 per cent.

In this market update of a financial year none of us will ever forget, I look at the major factors (beyond low interest rates and COVID-19 induced increased time in the family home) influencing prices in the Lower North Shore.

What we used to call “destination postcodes” have evolved and narrowed down to “destination streets” in the Lower North Shore as buyers zoomed in on prestigious spots.

These are the specific streets locals want to live on. Think Bennett Street in Cremorne. After a two year drought on sales in the tightly held street, pandemic selling created a buying frenzy, with 8 two-bedroom apartments selling one after another, ranging from $1.05 – $1.55m.

As recreational international travel came to an indefinite halt, expats across the world boomeranged back to Australia.

More than 500,000 (according to the Department of Foreign Affairs) returned seeking the tranquil and prestigious lifestyle of the Lower North Shore. Many are returning from comparable real estate markets in the likes of Hong Kong, London and New York.

Ignited by this new wave of potential buyers, increased market demand for prestige properties compelled prices to climb. Expats were determined not to miss out and began securing properties sight unseen before the borders had even opened. International search activity for properties on one portal, realestate.com.au, was up 6.37 per cent in April — on top of what was already a mammoth 20 per cent increase in the previous 12 months to 2019.

Facetime inspections and video walkthroughs by buyers’ agents became the norm at property viewings. Expats were ready to buy ‘as is’ to avoid the inconvenience of relocating to rental properties when they returned.

With another 34,000 reported to return home, it begs the question – where will they want to call home?

The pandemic shifted buyer priorities as working from home became the norm. Coupled with ultralow interest rates and easy access to credit, locals began searching for more expensive properties with functional layouts and dedicated spaces to match our new way of living.

Making up about 70-80 per cent of luxury purchases, the prevalence of locals upsizing added pressure to an already competitive market. This pushed prices up further, as demand exponentially outweighed supply.

For instance, in January, the well-kept local secret of Longueville emerged as one of Sydney’s most elite suburbs joining Mosman, Milson’s Point, Kirribilli, Cremorne Point in the top ten best performing suburbs for property prices, according to data house CoreLogic.

In one sale, upsizers from surrounding suburbs emerged, fuelling competition and on the cusp of the financial year four bidders battled for a five-bedroom family home on the beautiful peninsula, selling for $7.4 million – more than $1.4 million over reserve.

Many Lower North Shore locals took advantage of surging house prices to sell their large homes and relocate to townhouses and spacious apartments in surrounding suburbs. Add those downsizers, who want to stay local while capitalising on selling their property for a grand profit in this market, into the mix and you’ve got rampant buyer demand.

Community remained key for downsizers and local buyers alike. New developments, such as Akoya in Greenwich, are being built with a post-pandemic focus on neighbours and community in mind.

The pandemic made the appeal of proximity to CBD office locations moot, galvanizing swarms of young professionals to upgrade to luxury apartments as they re-evaluated what was important, or should we say, necessary in their home.

Professionals now prize dedicated workspaces. A desk stuck in a corner of a spare room no longer suffices. In the midst of a pandemic, some call the need to upgrade “sanity-saving upsizing”.

When searching for a new home, we found buyers often asked for spacious luxury apartments in good neighbourhoods and proximity to retail services. Are nearby neighbours young professional parents too? Is there a separate study? Is there ample light throughout the day?

In some markets, apartment prices in premium locations began growing faster than houses. North Sydney apartment prices, for example, have experienced 6.7 per cent growth and now have a $1,120,000 median unit price. This change in buyer behaviour away from pokey apartments saw a plethora of one-bedroom apartments up for sale and also for lease as their popularity dwindled.

Auction campaigns dramatically shortened over the financial year as potential buyers became impatient. Their offers became decisive and compelling for sellers. Buyers no longer wanted to wait the standard four weeks to see if they were going to be outbid, again.

The shortage of stock across the Lower North Shore and the fear of missing out (FOMO) among buyers induced battles at auctions. A sought after two-bedroom apartment in the well located Ben Boyd Rd, positioned less than 400 metres from the heart of Neutral Bay, catapulted $220,000 above reserve on auction day. Launched online with an auction guide of $1.05 million the property attracted 110 groups of potential buyers as they walked through the spacious two-bedroom, one bathroom apartment, with 31 contracts being issued.

After being open for only two Saturdays and two Wednesdays, it hit the auction floor two weeks early with the reserve set at $1.2 million. Fastforward 18 bids later, at an average increment of $13,000 per bid, and the property sold to a first home buyer at $1,420,000.

Summer holidays in Europe and ski trips to Aspen were replaced by staycations and annual overseas travel budgets were diverted to upgrading the family home. Australia became a renovation nation. Data from the Australian Bureau of Statistics showed the value of home renovation-related lending in January was up a massive 47.4 per cent compared with the same time last year.

From tennis courts and swimming pools to fresh living room makeovers, some homeowners began renovating with the aim of selling or leasing their property. Topping the state, Mosman families spent up to $82.4 million on renovations and an average of $2.2 million on knock down rebuilds.

Unsurprisingly, the Australian Bureau of Statistics recently announced that investor loan commitments had risen 13.3 per cent, the highest since April 2015. Taking advantage of record low interest rates, tenant trends and strong rental yields investors resurfaced in the luxury market in the latter half of the financial year.

Contrary to reports of the dwindling rental market in Sydney, prestige apartments prospered – those renting for upwards of $3500 per week and beautiful big homes asking $4000+ were rented quickly and easily.

Individual suburbs, such as Lane Cove flourished with a five per cent increase for house rentals. However, average rents for units fell across the board. Lack of space and sunlight became one of the most unattractive characteristics of any property in a post-pandemic market.

Renters spoke with their feet. They moved in droves from one-bedroom apartments and average rental prices in North Sydney, Ku-ring-gai, Lane Cove and Hunters Hill dropped by up to 9.5 per cent. Willoughby suffered the steepest decline with rents decreasing by 10.9 per cent.

Commercial real estate has its own story to tell. At the peak of the pandemic, rent collections for large retail malls in the Lower North Shore were as low as 30 per cent. As the economy reopened, rent collections bounced back to 70-90 per cent with foot traffic close to pre-pandemic levels.

The retail sector nationally is continuing to lose market share to e-commerce (11 per cent of sales in Australia were made online vs 7.2 per cent in the prior year, per the ABS at November 2020; and expected to reach 20 per cent by 2025). But what we are seeing in the Lower North Shore is a concerted effort by the community to shop local.

An investor recently bought the BP service station in Willoughby for $5 million at a 3.85 per cent yield, and in Neutral Bay a Tabcorp-leased premises, sold for $3.4 million on a 4.69 per cent yield.

As we enter the new financial year jumping back into lockdown, what can we predict is next for the Lower North Shore – market 3.0? 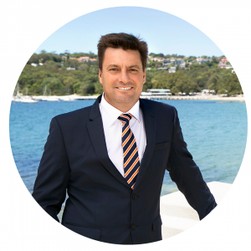 Why relational service will always win over technology